Titleist Weighs In On Wedges 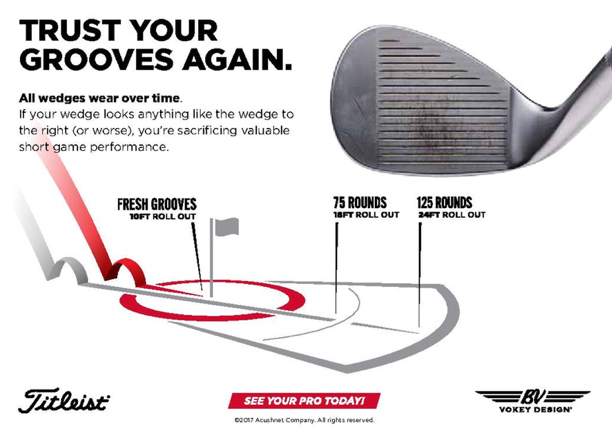 To build off my lesson lest week “Get Groovy Wedges”, Titleist released research this week confirming the stats I used from James Seikmann. So, instead of getting wordy, I’ll just share what Titleist had to say through the use of plagiarism.

All grooves wear over time. Particularly a player’s ‘go-to’ wedge or bunker club. Bob and team have researched groove wear during the past 9 months and have found that all golfers should evaluate their grooves after 75 rounds of play, or more frequently if a player practices with high frequency.

The tell tale signs of worn grooves are:

Higher launch: When the grooves no longer grab the ball, the ball will roll up the face, causing launch to increase, resulting in less trajectory control.

Lower Spin: With less effective groove edges, the golf ball won’t have as much spin on shots into and around the green, resulting in less control on shots requiring the most precision. For most players, it means no longer hitting the desired one hop and stop shot.

Less Carry Distance: Due to the higher launch and the roll up the face, the golf ball launches with less speed at a higher trajectory, resulting in lower carry distances. So if a player says “my 100 yard club is only going 95 yards”, that may be a sign of worn wedges.

The most important feature in each of these signs is that they are all measurable. As noted in the video, at 75 rounds of play a golfer may be losing as much as 1,000 rpm of spin, resulting in almost double the roll out. If that same golfer is trying to hit a precision wedge shot to a front pin, they’ll go from a great look at birdie to a shot that rolls out past the hole and a hopeful 2-putt par.