Adam Scott may not have catapulted himself to the top of the golf world but for a short moment, but his golf swing is as technically sound as I have ever seen. 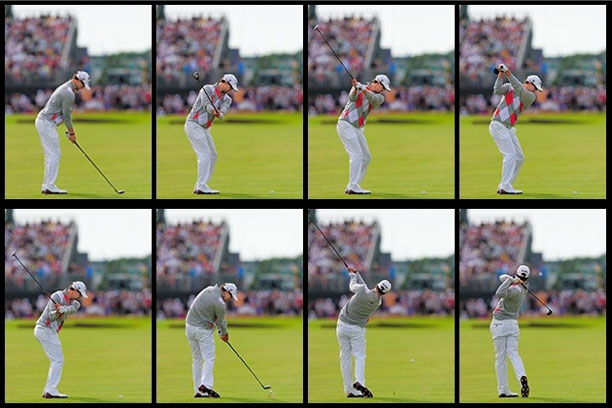 Takeaway. Notice how the club shaft extends through the seam of his right shoulder.  This allows the club to come up on plane, whereas most bring the club behind them on the way back.

The Top. Adam is turned 90 degrees with the shoulders, yet his hips remain slightly turned around 40 degrees keeping his legs perfectly bent, identical in form, and balanced.

The Downswing. The club drops from the top, the club head behind him, the shaft seemingly slicing thru his right forearm.  A few more frames later will show the club shaft gliding lower near the elbow, completely on plane into impact.

Impact. The body turns through impact, both the hips and shoulders open 30-40 degrees towards the target. The body swings the club, the arms obey the big muscles. The shoulders tilt to impact, keeping his posture as the upper body rotates around his 45 degree spin angle; the same angle set at address.

The Release. His arms now catch up and pass the body, which led and directed the arms through impact.  The violent, yet smooth snap of the release of the club face allows it to square and impact the ball with perfect timing and speed. The right arm now crosses over the left arm as it begins to fold and wind down to a finish.

The Finish. He can now stand upright as he watches the ball sail, float for a while, and descend on the target. He will hold that balanced finish until the ball lands. His left foot is firm on the ground holding the weight, the right foot is now in a toe tap stance, the right knee points at the target a full 90 degree turn. The hips have turned 110 degrees, 20 past the knee. The shoulders have turned 125 degrees, 15 more than the hips, allowing the body to glide to a slow and balanced finish.

Conclusion. Now copy it. Do it over and over. Use slow motion video available on your phone to make sure you can perform it well. Make a hundred swings a day, and for goodness sake, do not hit a ball while doing it. The ball makes the swing do ugly things while you try to emulate a perfect swing.