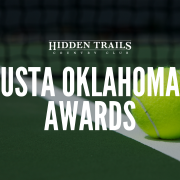 It’s almost time for the USTA Oklahoma Awards coming up on January 30, 2021. USTA Oklahoma awards those individuals and organizations annually who have contributed above & beyond normal expectations.

We’d like to ask our members to support our tennis center by nominating our facility, coaches, or tennis players at our club who have exceeded expectations!

The deadline to nominate the winners is September 15, 2020– click the button below to cast your vote now! 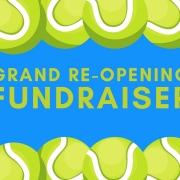 Hidden Trails Tennis & Pickleball Center marks new beginning! Come celebrate with us Friday, October 9th at 6.30-10pm! We are proud & grateful for many improvements our facility & program has undergone in the past couple months. Our wonderful members & guests are the reason we keep trying to reach new heights. We invite you to join us for a fun filled Friday evening & help us fund the new things to come.

We are excited to offer 16 terrific items for bid in our silent auction.

Some of the items include: 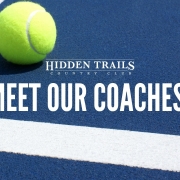 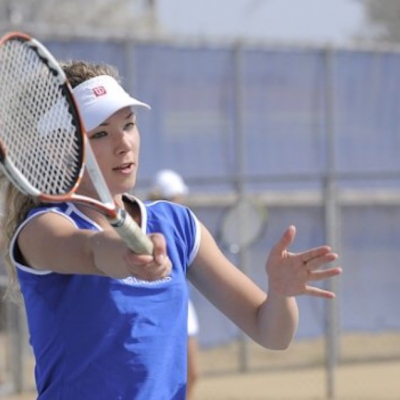 Elizabeta Abramovic Babb is a certified USPTA professional who recently founded and operates Wolf Tennis Academy that has over 50 students.

Born in Zagreb, Croatia, Elizabeta comes from a family of seven children where tennis runs in the blood. Her father is an established coach who operates a tennis academy in Croatia and her two older sisters were professional tennis players. Her oldest sister Ivana Abramović was a top ten junior tennis player in the world at the age of 16. Her career high on the WTA singles rankings was number 143. She reached her career high doubles ranking of No. 141 in 2007. Elizabeta’s sister Marija was also an accomplished professional player with career high on the WTA singles ranking of 266 and 140 in doubles. She is now licensed in PTR and USPTA professional tennis courses.

Following the footsteps of her older sisters, Elizabeta started playing tennis at the age of 7. After finishing high school she decided to pursue education in the USA. She accepted an offer for a tennis scholarship at the University of Central Oklahoma.

After completing a bachelor’s, she decided to pursue her master’s in Business Administration and at the same time accepted the offer to work as an assistant coach for the Women’s tennis team at UCO. Her coaching experience was greatly enhanced while working for several different tennis clubs, including Kicking bird and Greens Country Club. She also coached middle school and high school students at Cassidy School for the last 2 years.

Elizabeta is a competitive spirit that excels at making tennis lessons accessible and fun for various playing levels and abilities. Her passion for the game aids in making the lessons challenging and engaging. 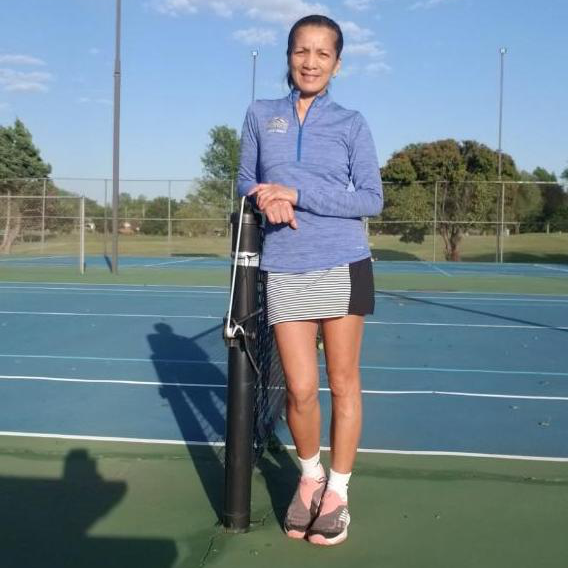 Jenny Marcos is one of the most decorated tennis players in Central Oklahoma history. She was a standout singles and doubles player from the late 1980’s who earned all-American honors four times. Marcos was inducted into the Central Oklahoma Hall of Fame in 2007.

In her professional career Jenny served as the tennis director at Hidden Trails Country Club (at the time Willow Creek Country Club).

Additionally, she has coached both women and men college tennis teams at Southwestern Christian University and is currently the head professional at Santa Fe Family Life Center.Jenny is also an excellent pickleball player. She was a National Champion for Singles 50 & over and 50 & over Mixed doubles. 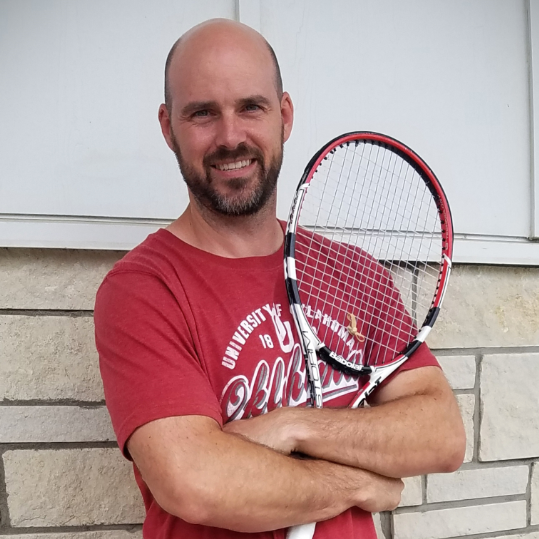 Rodney O’Dell is a respected leader and coach within the Oklahoma tennis community. He is a certified USPTA Teaching Professional and currently serves as the USTA Oklahoma Southwest Quadrant Representative. In 2009, he helped re-establish the South Oklahoma City Community Tennis Association (SOCCTA) and served as Vice President and President from 2009 – 2011. He formed the All Star Tennis Club in Mustang, where he directed all club operations and provided group and private lessons for ages 6 – 18 from 2012 – 2015. His USTA career includes the following men’s 4.0 league accomplishments:

“I love tennis and enjoy sharing my passion, knowledge, and experience that I’ve gained over the years with others. I like to explain the physics behind tennis and how the body can be used as a whole to generate power from the ground up. My desire is to teach others the fundamentals of tennis, the importance of fitness, mental toughness, good sportsmanship and a love for the game that will last a lifetime!”  – Coach Rod
Linda Faye | Tennis coach 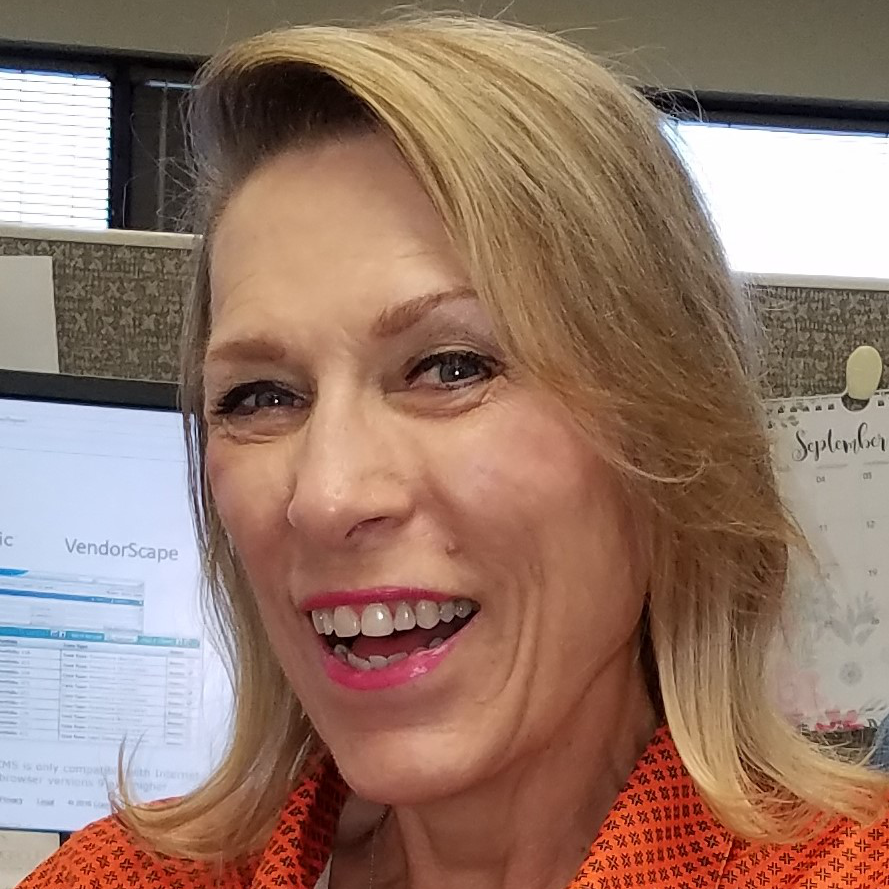 Linda Faye Pratt fell in love with tennis watching the likes of Bjorn Borg and Chris Evert, but had never played tennis until she accepted her first teaching job and her principal said, “with this job you will be the girl’s tennis coach.” Excited, she decided to spend her summer in Germany at a tennis club where her friend, who happened to be the head tennis pro, began teaching her the mechanics of tennis on the red clay of Europe.

Linda Faye graduated from Oklahoma State University with a degree in Secondary Education and Master’s Degree in Elementary Education from Oklahoma City University.  She coached the Girls Tennis team at her alma mater, Midwest City High School and was honored as the Oklahoma East All State Girls Tennis Team Coach.   She concluded her 28 year teaching career in P.E/Health for the Dept. of Defense Dependent Schools, U.S. Naval Base, Yokosuka, Japan.  Since returning from Japan, she has participated in USTA Women’s and Mixed Doubles league play and is a member of OCTA and SOCTA.

Linda Faye has specialized in coaching the 10 and under age group at Hidden Trails since 2016.  Her main goal is to make tennis simple, exciting, and fun so that students will have early success, leave with a smile on their face and ultimately choose tennis as their sport for a lifetime. 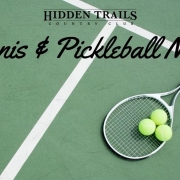 Come alone or with friends and Hidden Trails staff will do the rest to make sure that you and other tennis enthusiasts have a great afternoon where fun, competition, and socializing are the order of the day!

Court positioning for doubles will be the focus for this Clinic. As the Fall USTA leagues are approaching we want to help you become stronger tennis players and take your game to the next level. Players will be spread out on courts according to playing level. All levels welcome.

2-4pm – Open doubles match play after the clinic for anyone who wishes to stick around and play.

Cost: $5 for guests, free for members

12 pickleball courts will be available at Hidden Trails for our Pickleball lovers.

Cost: $25 per player, all levels are welcome

Take your Pickleball game to the next level with our National Pickleball Champion, coach Jenny Marcos!

Join us for this fun tri-level league (levels 2.5, 3.0, 3.5). Every Friday morning we will be competing against other clubs in town in an effort to win a traveling trophy. Our League captain is Gay Harris. There are only a few spots left so hurry up and register by contacting the front desk or text Elizabeta at 405-837-4269.

Drop-in group on Saturdays 9-10am.
Free for members, $15 non-members

Who is this program for? Beginning Tennis players and anyone that has yet to discover tennis. This Academy is for adults only!

Sessions to choose from:

For competitive players 12 and up. Practice times are Mondays, Wednesdays, Fridays at 5-6.30pm. We now offer additional match play day on Saturdays at 2pm.

H.I.T.S  is the designated hang out spot for tennis for the ages of 13 and up. This program will be available every 2nd Saturday in the month.

Parents, looking for a date night or do you just need to relax? Bring your kids to Hidden Trails and we will provide a night full of fun activities while you enjoy some time to yourself. This program will be available every 2nd Saturday in the month.

If you are planning on coming to any of our programming please make sure to register by contacting Elizabeta Babb at 405-837-4269 or sign up via our court reserve app at www.courtreserve.com

For any questions regarding pickleball at Hidden Trails, please contact our Pickleball Director Brian Richardson at 405-237-9366.